No time to blog!

It has been a hectic few weeks with definitely no time to blog! The three day numeracy training took up a lot of my time. I think it went well-it was certainly very lively! There was a lot of debate on whether the jumps on the number line for division should go forwards or backwards and the direction of the arrows! We also had great fun singing 'Five Little Ducks'! It was also great to see the SSIT taking part in some of the numeracy games-much more enthusiasm shown then when we did it at training sessions in the UK!
Making number beads. 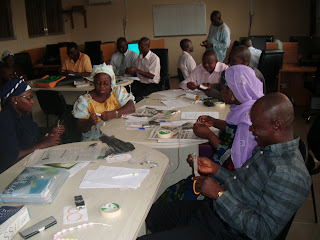 We have another VSO now called Julie who is from Oregon. She is based in Oro but stayed with us for a few days and has done some work with us. It is good to have another VSO to share experiences with. Another couple are due to arrive in April and there may even be more which would be great.
We have also been doing work on the Primary 4-6 curriculum with the SSIT. Last week Sue, Lea. Julie and I worked with the SSIT taking THE Nigerian Curriculum apart and trying to simplify it-no easy task! There is some complicated stuff in it. Eg: at Primary six pupils should be able to use ‘modals’ correctly, identify indefinite adverbs, read fluently simple passages based on organized meetings , move a vote of thanks and introduce the chairman, using the correct and appropriate structural and lexical items! I quote from Primary 4; 'conditional sentences expressing wishes and desires that are unlikely to be fulfilled using 'if' 'supposing' 'if not' assuming' with unreal situations'!. For Speaking and Listening pupils are asked to practise saying, 'plastic bucket, cotton dress, diamond ring, enamel bowl, rubber stamps'. Why????The grammar section includes the use of the gerund! Maths has LCM (lowest common multiple). Really hard stuff on square roots, profit and loss....... The text books just make things worse giving at least three different methods for doing each calculation! We also visited some schools to see how 4-6 children and teachers were coping. There were a lot of problems in rural areas. I visited a school under a tree where a school of 17 were being taught by one teacher. Three little primary 1 children were sitting so quietly doing nothing while he taught the others! He was, however, using teaching aids and had tried to group the children so he could give years 4-5 a task (draw a bottle) while the others did numeracy with him. In some schools the problem was the teachers’ subject knowledge and a lot of children were copying examples from textbooks for maths. However it was a different story in the urban schools. There were very big classes but usually with two teachers and generally the children could read some very difficult passages. I asked a child to read to me and when she had read a few lines I asked her a very simple question which she could not answer. The teacher said I had to let her read the whole passage and then there were questions in the book that she could answer! We all saw quite a lot of mistakes in maths teaching and a lot of reading involved reading and repeating parts of sentences. Everyone was very pleased to see us and the teachers are keen to have training and have already tried out some ideas from the 1-3 teachers which was encouraging.
A week ago we went to a naming ceremony. Baba is one of the drivers and has given us a lot of lifts. He is a very friendly man whose real name is Tajudin but is called Baba because he is older than the other drivers. Lea sometimes gets called Baba too! Baba’s second wife had a baby a week before so we were invited to his house. The baby is called Jimol because he was born on a Friday and was gorgeous. Baba’s wife is beautiful and looked amazing for someone who had recently given birth. We were made very welcome and I was allowed to hold the baby. I avoided the goat soup but enjoyed talking to everyone.
On the way home we got caught up in a political rally which was a bit scary. Gbenga, who gave us a lift, was brilliant and managed to get us out of the convoy and made sure Emma, who was following got out too. At one point Gbenga said he would get out to see what was holding us up and I had to sit in the driving seat ready to drive if the queue of traffic moved. I was very relieved when he returned! There were hundreds of people shouting, leaning out of cars and vans, waving brooms and chanting for their party. We even saw some of them being paid by party officials. We were okay but there would have been trouble if they had met up with a rival party.
It has gone even hotter and even Nigerians are complaining about the heat. Neppa has been better though-people say it is political-and on most nights.
We celebrated pancake Tuesday and Lea tossed them perfectly! I also made yeast bread which was amazing to watch as it rose so fast in the heat!
In three weeks we are going home for a break which we are looking forward to. Can’t wait to have a bath and eat fast food! 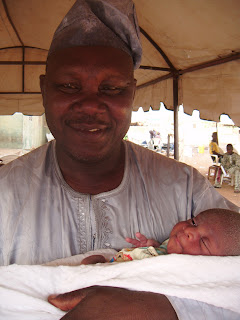