The Durbar festival dates back hundreds of years to the time when the Emirate (state) in the north of Nigeria used horses in warfare. During this period, each town, district, and nobility household was expected to contribute a regiment to the defense of the Emirate. Once or twice a year, the Emirate military chiefs invited the var­ious regiments for a Durbar (military parade) for the Emir and his chiefs.

During the parade, regiments would showcase their horsemanship, their preparedness for war, and their loyalty to the Emirate – but sadly not their poo-picking skills. Today, Durbar has become a festival celebrated in honour of vis­iting Heads of State and at the culmination of the two great Muslim festivals, Id-el Fitri (commemorating the end of the holy month of Ramadan) and Ide-el Kabir.
Eid al-Adha  or "Festival of Sacrifice" or "Greater Eid" is an important religious holiday celebrated by Muslims worldwide to commemorate the willingness of Abraham (Ibrahim) to sacrifice his son Ishmael (Isma'il) as an act of obedience to God, before God intervened to provide him with a sheep— to sacrifice instead.[1]
Salah - the second pillar of Islam is prayer; a prescribed liturgy performed five times a day (preferably in a mosque) and oriented toward Mecca.
Barka da sallah meand Happy Sallah and is said during the celebrations.
Lesson over!
Lea and I decided to got to Dutse, the capital of Jigawa, to celebrate Sallah which was on November 6th, 7th and 8th. We went to an education meeting for VSO in Abuja the week before so decided to travel from there. It was good to be in Abuja with other volunteers and we even got to go to the cinema again. We saw 'Johnny English Reborn' which was really funny and stuffed ourselves with popcorn! 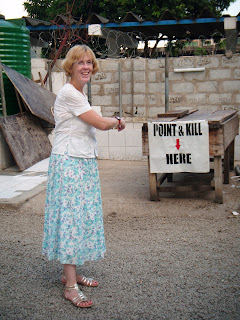 This is the bar where we all met up. Sadly this is the place where you choose a catfish. It is killed in a very horrible way. 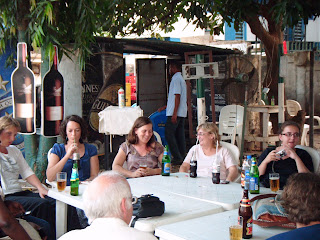 I was enjoying a 'chapman' here-a lovely fruit cocktail at a very expensive Abuja price! It was good to be in the Chrystal palace hotel again. We had a very strange room with a sort of large entrance with an additional telly in it. We even had a warm shower-the food was not too good but we got good vegetable shwarma nearby. 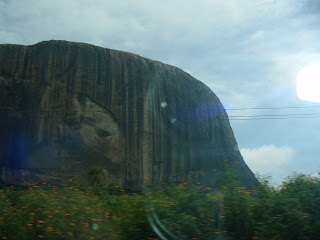 So the long journey north began! Eight of us crammed into a car meant for seven at the filling station. However it meant no-one else was with us so we didn't have to contend with goats, etc. This is a photo showing a face in the rock which looks like ET. A hotel was being built but then the face appeared as they carved the rock out. It was taken as a bad omen and no-one has ever stayed in the hotel. 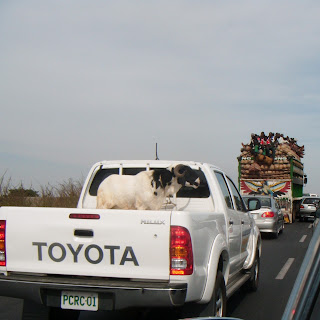 Everyone was heading north to celebrate Salah. The north is predominantly Muslim so it was very busy on the roads. The lorry in front is loaded with yams and the lorry behind has an unsuspecting ram enjoying a breezy ride. Rams were everywhere taking drinks on the roadside or crammed into trucks. 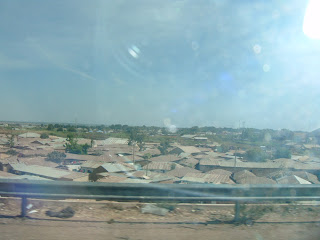 We drove through Kaduna which is a very busy city. 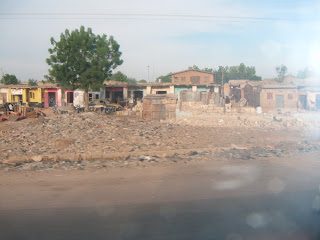 Kano was very dusty but the scenery was changing. As we entered Jigawa there were more open spaces, flat roofs and it was good to see the harvest of Guinea corn. In fact it was good just to see fields' people on bikes and a slower pace of life. We arrived at Lucy's house where we were all staying. Her garden is truly lovely and relaxing. She also has electricity, running water, a hot shower and a TV! Netty, from Kano was already there and had a meal ready! The next day we were up early to see the start of the Dhurba. The first day the Emir goes from the Governor's house
to the mosque. He is part of a very long colourful procession of people on horse back. There are four emirates in Jigawa and representatives from all the villages and towns are represented in the procession. Everyone has new clothes. The first day there were no women or girls in sight. The next morning the Emir goes from the mosque to the Governor's house and on the third day everyone is allowed to attend and the Emir goes to the Mosque. I was amazed at the splendour and the hundreds of men taking part in the procession. 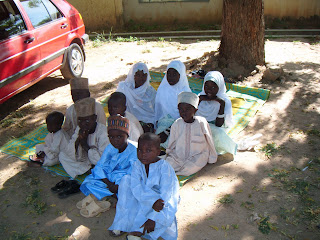 Here children dressed in their new clothes wait excitedly under a tree. 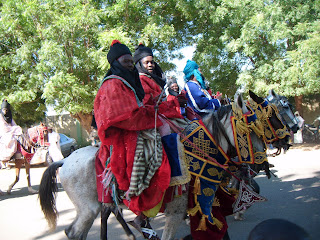 Some of the horsemen were as interested in us as we were in them. As I took photos of them they took photos of us!!!! The horses were very well-behaved too despite the noise and flapping clothes! They were all stallions too and no horse shoes but sadly very thin although they were all beautifully groomed. 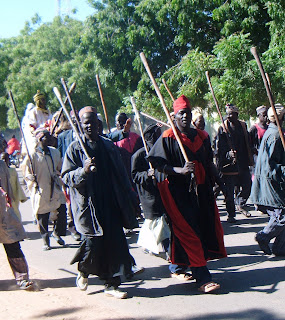 Every village had its own costume. Some walked but most were on horseback. Note-not a woman in sight! 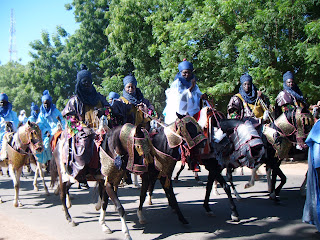 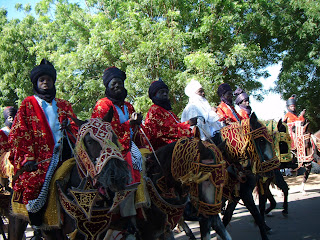 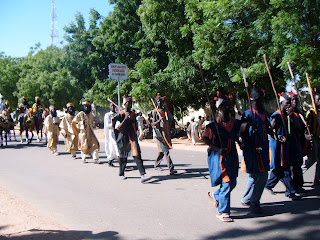 Each village was led by someone carrying a banner with the name of the village. 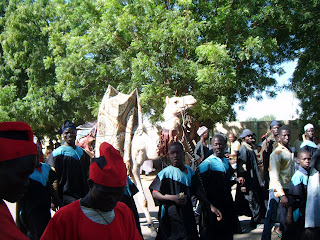 There were even camels. This camel was leading the procession with the Emir. 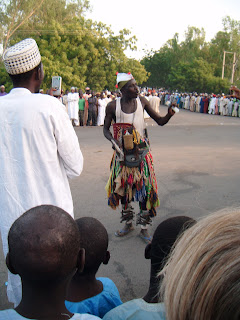 There was a lot of entertainment too. 'Hard' men were demonstrating their skills of eating knives and cutting their throats with sharp knives!! 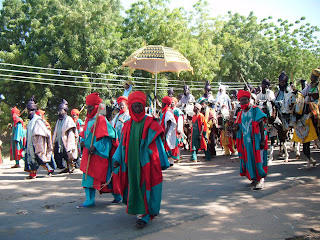 The Emir is under the umbrella! 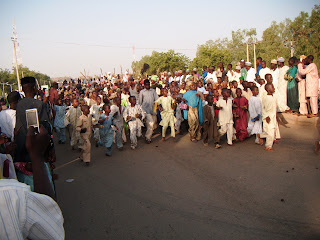 On the last day the children were allowed to join in! 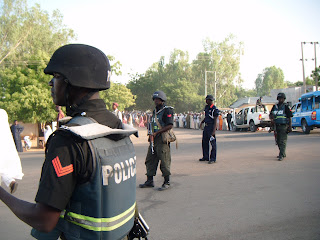 The police were out in force on the last day! We had to take a step back as the Emir passed as his arrival was celebrated by firing guns! 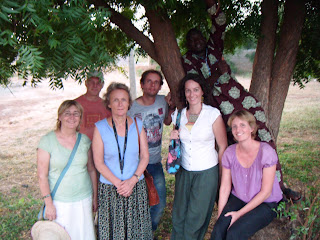 So I retreated to the shade of this tree! Suddenly I felt something crawling up my bag with very sharp claws. A gecko popped out of my sleeve and ran down my arm! You can imagine the laughter this caused. Fortunately it was quick so I didn't have time to scream!!! 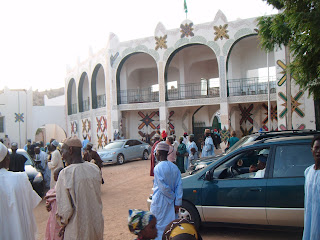 On the second night we walked to the Emir's palace. We saw him getting into his car. We were then invited to go inside his palace. We were given a guided tour and presented with three books written by the Emir. The palace is beautifully decorated and the patterns were amazing. 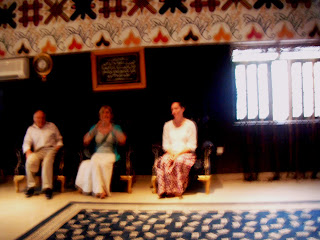 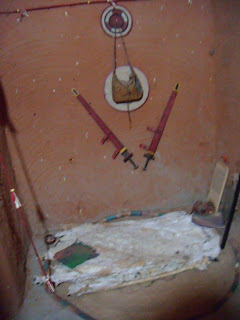 There was an old part too. This is where the Emirs used to pray, 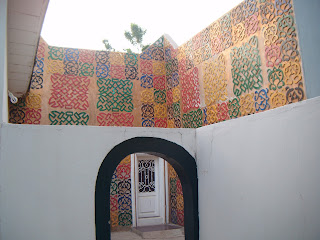 We were also shown the museum where some of the darts still had poison on them and we were warned not to touch them! 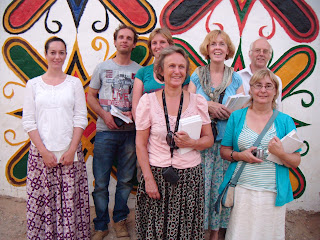 It was a great experience and I felt really privileged to have been invited in.
Posted by Caroline Knowles at 06:50