The last few days were the hardest of all. Walking out of the ESSPIN office for the last time was hard. My desk was so tidy and bare. I will no longer have to sit there editing lesson plans while keeping an eye on the waste paper bin in case the rat has decided to climb in there again! I said my last 'odabo' to the guard, walked downstairs and had my last pronunciation lesson from the guard on the desk and a final wave to Abdulai, the man who lifts the barrier at the gate. I have had some amazing conversations with that man-mostly completely beyond my understanding but he always seemed happy with my replies! 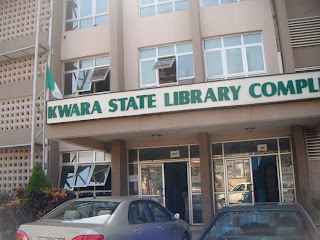 Clearing out our house and packing up took a lot of time as we had acquired so much stuff over fourteen months. We 'dashed' most of it. I asked the guards to put some stuff in the bin for me but not much ended up there. Very little of it was rubbish in their eyes. Even my worn out shoes could fetch a few naira apparently-very humbling. Lea made a certificate of excellent teaching for Buki, the girl in the photo,  who tried to teach us a phrase in Yoruba every week. She would also test us on previous phrases and was quite strict! She brought her brothers round for the final farewell. 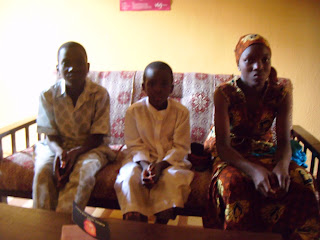 Then there was another party. Sue is relocating to Abuja so we were both leaving. Here the chefs are getting ready. 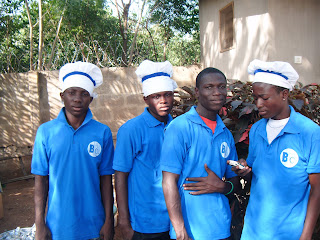 All the ESSPIN staff came in outfits made from the same fabric! Here is Ife-I will never forget making mincepies with her or going to the market. 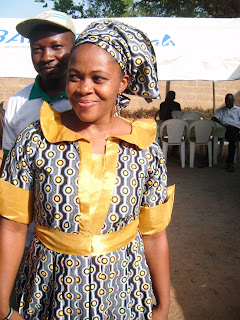 This is Kola who I worked with and sat next to in the ESSPIN office. 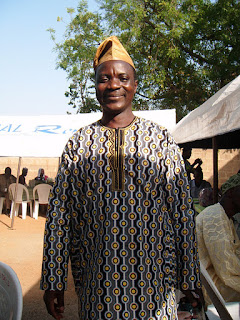 Then came Katherine, the deputy team leader who is a grandma like me and took us to the cantata at her church last Christmas. 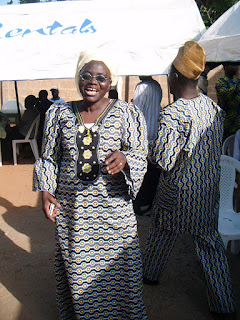 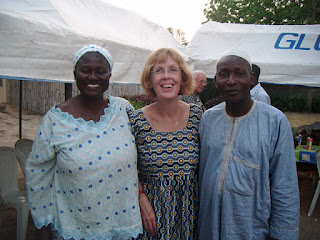 As a surprise the ESSPIN staff had outfits made from the same fabric for Lea and I and Sue and Mesbah. Here I am with two of the SSIT members- Eunice and Yunus (both pronounced the same!). 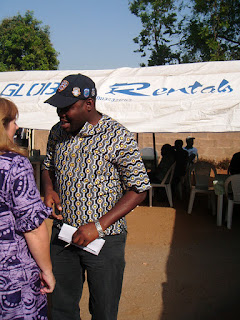 Funmi was in charge of the agenda. He also made a very nice speech about me as did Sherrife. 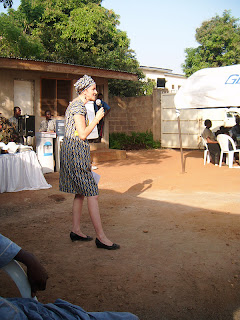 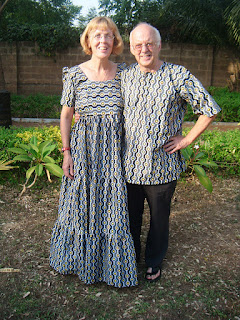 My dress was made from 4 yards of fabric!. Funmi bought Lea some 'palms' (sandals) to complete his outfit. 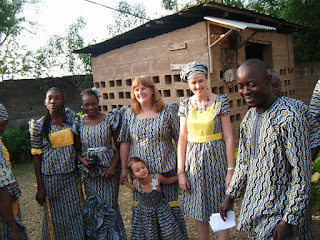 Even Sue's children had an outfit. I loved the flower on Bike's dress. 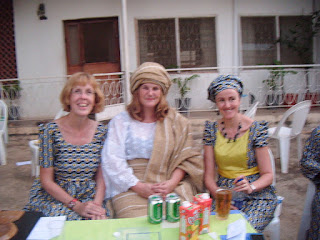 Sue was given special Yoruba cloth from SUBEB.
On the actual day we left Ilorin, Uzzar and Funmi and Sharon came round. We weren't sure when the plane was leaving-neither was the airline company Arik! As we left our neighbours were cheering and waving to us from the balcony and all the kids in the street came out to say goodbye. The woman from the tomato shop stopped the v an and gave us a mug and a calendar. 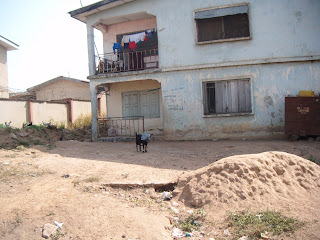 We finally left five hours later than scheduled. We l;eft Abuja early the following morning and were back in Heathrow at 3pm. I wore the lovely clothes the SSIT gave me all the way home. 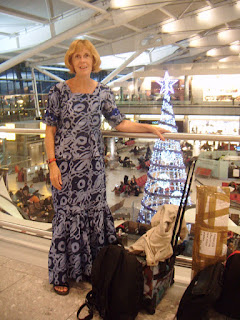 Here I am at Heathrow. Fortunately when we arrived at Manchester airport James had brought a coat and a blanket as it was rather cooler there than in Nigeria!
Posted by Caroline Knowles at 08:57