The State team in Enugu are interested in the lesson plans used in Kwara and so the SSIT were asked to come and do some training on phonics and numeracy with the SSIT team in Enugu. I was asked to come in an advisory capacity with SSIT members Dare and Tunji so we travelled here on Sunday. The journey itself was an adventure as it took nine hours on roads that Tunji classified as the good, the bad and the ugly but then we also added a further category-the horrible!
To get to Enugu we had to go through Oro and travel east. We stopped for bread and akara (cooked in palm oil over a little fire at the roadside) to sustain us on our travels and were soon bouncing down the roads. Our driver, Tajuden-or Baba as he is better known-skilfully dodged potholes and happily overtook six vehicles in one go to keep us on time.One of which was a big lorry with the slogan, 'Only the Living Celebrate'! He is a fan of Don Williams but sadly we were in the Hilux which only has a cassette player so had to make do with Jim Reeves which was quite soothing I must say.
The roads were quite busy as a lot of people were going to church. I saw a lot of people dressed in white- compulsory garments for the Cherubim and Seraphim church. 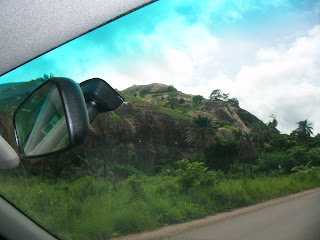 We finally said goodbye to Kwara and entered the state of Ekiti and a bad road. The houses here were similar to Kwara with tin roofs but there seemed to be more cement as opposed to mud walls. Ado is the capital of Ekiti. The scenery was definitely changing and became more noticeable in the next state-Kogi. This has more forest and there were a lot of different trees such as rubber and palm. They grow coffee and some cocoa here. It is more hilly and there are quarries. I finally got to see my hibiscus! 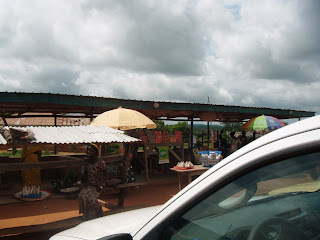 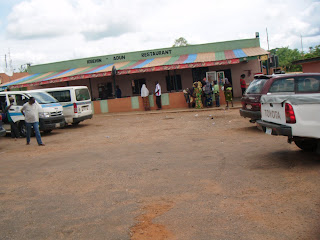 So then we stopped at a 'service station' where we could 'ease' ourselves -or in my case not drink and hang on until we got to the hotel-my bladder has certainly had a lot of practise at this by now! However I did buy some peanuts and bananas. Emma had kindly asked Ife to make me some moin moin so I was well sustained for the journey. The moin moin was delicious by the way. Tunji tried to persuade me to try the fried cows cheese on sale but I thought I would save that for the journey back when an upset stomach would not be such a disaster. They also sold 'slippers' (flip flops) and DVDs here.
We then reached Kabba, the capital of Kogi state and I spotted an old 'colonial' post box! There were more mountains and lots of crops growing which was good to see. 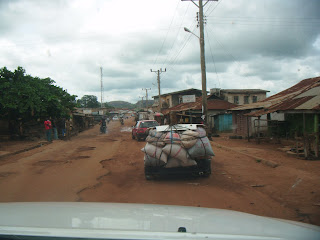 How much can you get in your boot???? 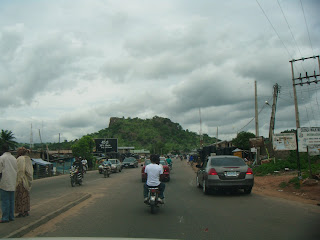 An express way surrounded by mountains. Actually there are just two roads and you swap from one to another depending on the severity of the pot-holes! 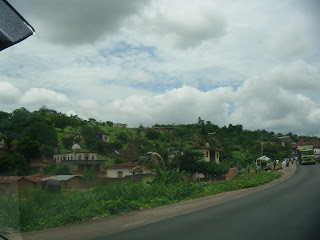 Kogi is more prosperous. I saw donkeys and horses here. 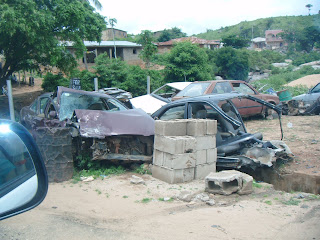 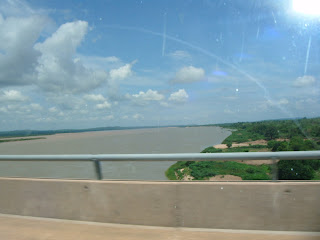 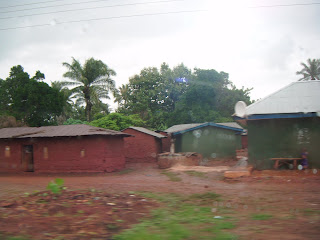 And then the rain came! 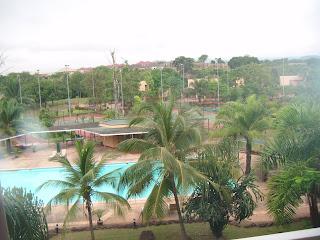 It stopped raining as we arrived in Enugu. Finally we got our weary limbs out of the van. This is the view from my hotel window!!! Enugu is great! Quite humid but cooler and lots of trees and greenery. There is a lake and gardens to walk around in the hotel grounds and lots of unusal birds. The hotel is nice-comfy bed, a/c, hot shower and good internet. Also friendly staff who made me special veggie food-can't ask for more!!! 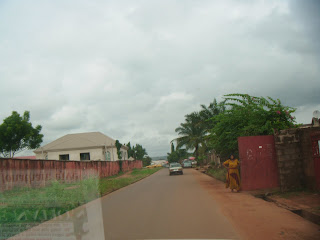 Enugu is more prosperous than Kwara and there are more cement houses. The roofs here are made of aluminium as opposed to iron in Kwara. They are often blue or coloured and as Dare said more aesthetically pleasing. There is more industry here too. 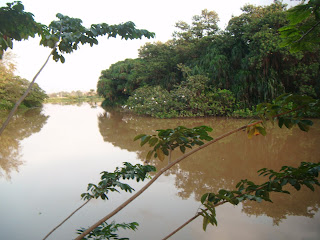 The lovely lake at the hotel. The white specks are hundreds of birds that seem to flock to the island. It was great to have somehere to walk to! 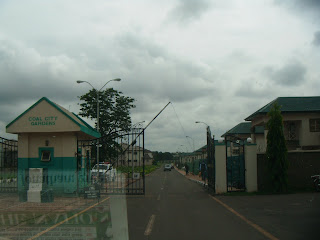 This is the entrance to the Esspin office where the workshops are being held.
Posted by Caroline Knowles at 14:24