Here we go again!-Back to Ilorin 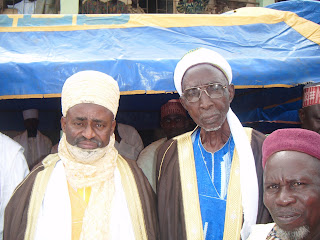 The fourth in line to the mallam. 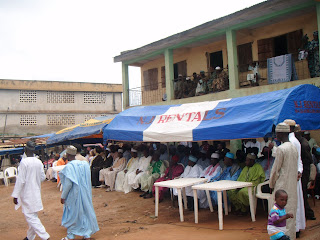 Sitting with the men. 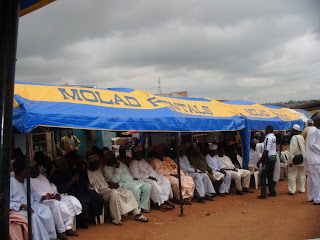 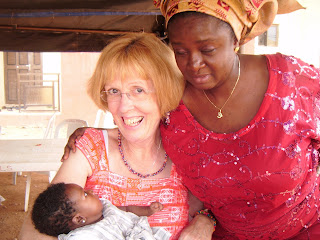 Seyi's baby
We were invited to another loud but enjoyable event-the naming ceremony for Seyi’s new baby, Alexandria. This was a Redeeming church which involves  a service in the church as a thanksgiving, then 40 days after the birth the pastor visits the home at 5am to name the baby and then later in the day there is a party. We went to the party! It was good to chat to our colleagues and friends and cuddle the baby!
Since coming back I have also been to a Muslim Funeral which was very interesting and not sad. Muslims have to bury the dead within 48 hours so the burial had already taken place. This ceremony was to thank Allah for his death.  The deceased was the father of a Bello, an SSIT member. As we were white and part of the SSIT we were allowed to sit with the men at the front. This is very unusual. We also received a special welcome in English. There were a lot of Mallams (Arabic teachers) there. A very important Mallam arrived who is fourth in line to the Emir. We were not only allowed to take photos of him but also taken to greet him. Everyone else was falling on their knees in front of him but as I was worried I might not be able to get up again I did a sort of courtesy which seemed to be okay. I was told he is a professor at a university so I could speak freely to him! We just thanked him! As usual there were microphones and speakers which we were privileged to sit next to! We were also given food and I felt privileged to be so welcomed.
New Challenges:
As there has been further burglaries in our area the landlords got together and now employ vigilantes. This is good and should make us feel safer but in fact it is quite scary to be woken at 11.30 and again at 3am by gun shots or screaming-tactics they employ to scare rogues!  Sometimes they blow whistles and this is okay but the screaming is horrible and sets the dogs off barking. There was also trouble one night when there was a fight with the vigilante and a policeman which resulted in a gun being broken in half and a nose broken!
The weather is slightly cooler and we have had some great storms as it is still the rainy season. Despite this our neighbour still has his generator on all night!
The other problem is there is very little fresh fruit and vegetables available. The price of potatoes and pineapples has doubled and the quality of the bananas is very poor. Yesterday I got a grapefruit which, although surrounded by thick skin was very good. I was amazed to find a lettuce too but it was quite bitter and I think I will have to cook it like cabbage. The trader said both these things had come from Zaria.
Generally prices seem to have gone up and everywhere feel a bit tense. There was a taxi strike too. I don’t think the atmosphere is to do with terrorism just that people are finding it hard to manage.
To  finish on a happy note. Lea, an ardent Liverpool supporter, made the ultimate sacrifice and decorated a cake for Sue with the Everton badge! 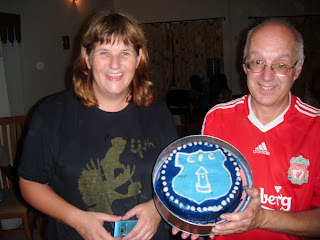 Posted by Caroline Knowles at 04:48