The wedding
Yesterday we went to Mary’s daughter’s wedding. It was fantastic and we were made to feel so welcome. Sue picked us u . She was dressed in Nigerian clothes as were her two daughters. Hopefully I will be able to have some made for me soon. Not too sure about the head bit though. We went to the party which was after the church service which lasted three hours! The party was in a huge hall at a school and was absolutely packed with at least 500 people. As you can see from the photo everywhere was lavishly decorated with a blue theme. The cutlery was in gold coloured bags and the chairs were dressed in silky material and ribbons. Big bows were festooned across the balconies and there were fruits and sweets on the tables. One of the fruits was a garden egg which people seemed to enjoy but tasted a bit like a dried bitter cucumber to me! We sat at the ESSPIN table but I was also greeted by members of the SSIT  team. Lea was soon enjoying the chicken and beef plus skin accompanied by rice with chopped liver. Katherine-a really lovely kind ESSPIN  colleague- made sure I didn’t miss out and I had a dish of a kind of coleslaw with potatoes and chopped boiled eggs which was very nice. Katherine told me it was time for the dance for the bride’s mother so some of us got up. I was spotted by Jegede and Eunice who took me near to the front and we had a good dance together which involved a lot of hip swinging ! Next thing people were giving me naira notes! Apparently this is called “spraying” and is a way of complimenting guests!
Later on Mary came over and gave us all a hug and made us feel so welcome. She was beautifully dressed. Then came the procession of the bride who danced in with her husband followed by bridesmaids and family. Again I had special treatment as other guests ensured I got a good place near the front so I could take photos. The bride looked stunning-her dress was from London. After there was a long speech by the chairman and then a huge cake appeared. Gifts were brought to us all. I received a whisk and Sue got a hand juicer. In work the next day we all were given huge umbrella and a piece of cake which was delicious. It is hard to really describe the party. It was packed full with bright colours, noise, laughter, singing, dancing and just such good fun! 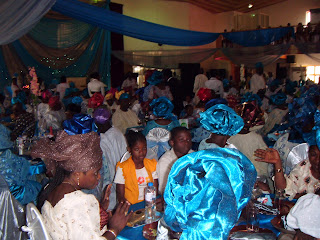 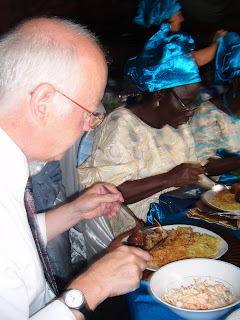 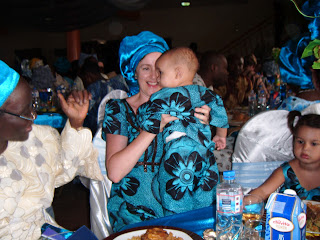 Posted by Caroline Knowles at 07:37