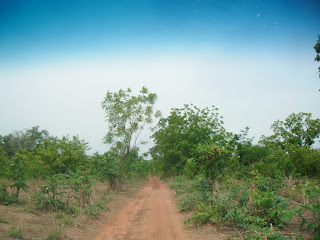 We went down some very bumpy 'roads' to get to the schools. Alatise, the driver, did well and eventually we found them. One school was called 'Budo-Adio' and so we went to 'Budo-Adio' village only to find the school was in the next village. Half the children didn't go to school as it was too far and they could not cross the river. 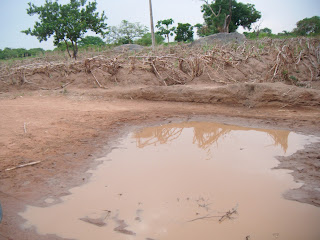 At another place the bridge had broken so we had to make a detour. Strategically placed on the path were men 'collecting' money for a new bridge! We were also stopped for half an hour by 'tax enforcers' who claimed we had the wrong number plates for a government vehicle and needed to pay 25,000N! I put him on the phone to ESSPIN office and he eventually said he would not take us to the police station out of respect for me as I was a foreigner! 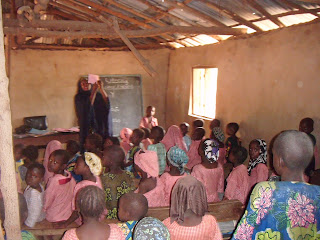 It was well worth all the effort to get to this school. This teacher had over forty in the class-primary one and kindergarten yet she had really got the hang of the phonics training! She took them outside to do some phonic singing. Her classroom was very dark and hot but she had flash cards and taught them how to blend the sounds together! 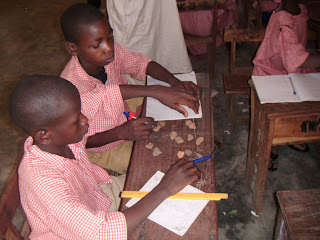 This teacher was in a room where four lessons were happening and he was teaching fractions with the stones. 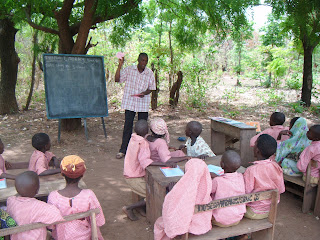 In the same school-because of lack of spave this class was outside. They were learning the days of the week. There are big problems during the rainy season as there is so little space inside and a lot of the benches are broken. At another school the project officer showed me the toilets that were being built. At the moment everyone goes in the bush but a lot of the children have been bitten by snakes. I have my bladder well trained for these visits fortunately and have only had to go in the bush once-where I made a lot of noise first!
Posted by Caroline Knowles at 07:01