What a fascinating journey. This was our first stop. In the wet season this river will be full. We watched the women washing and the fulani leading their cattle through the river. A man was even washing his bike in the river. It was such a timeless peaceful scene. 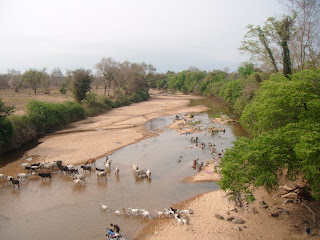 Eventually we arrived at the LGEA where we had a warm welcome. We were them taken by the head of school services to a village by the river Niger. We went to the school in the photos. In the rainy season the children cannot go to school as this whole area is flooded. The village is also flooded and often people drown. However they are now building a new school on higher ground and the villagers will move there wehn the rains come. The school is very basic and there is only one teacher but he said he is using the lesson plans! It is very difficult to get teachers in rural areas. We were told that there is still a belief in witchcraft and people believe that newcomers can drain the wealth of the villagers so 'witches' often put curses on new teachers which make them very ill. 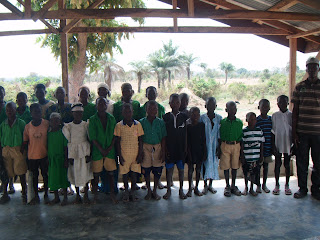 The children were a bit scared of us at first-they had not seen white people before! When they knew we were there the parents came to talk to us too. While Sue talked to them I managed to speak to some of the children. They were able to tell me their names and what class they were in. 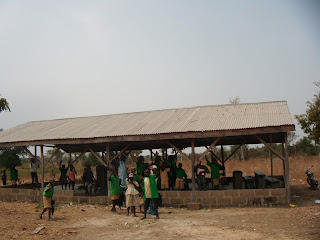 We left the school to visit their village.
Posted by Caroline Knowles at 01:12