The MLA took over our lives of two weeks. MLA means moderating leaning achievement. Before the lesson plans an MLA was carries out and the results were dire. Children were in school but learning virtually nothing. Only 4% could read a few words and spoken English was very poor too. The quality of the lessons was very poor and teachers themselves had very poor literacy and numeracy skills. So two years on DFID wanted to do another NLA to see what impact the introduction of the lesson plans and the teacher training was having. I went to schools to monitor the MLA which was carried out by the SSIT. On the whole they did it very well but there were some problems in one LGEA and it was not completed there so someone had to go back with them to ensure it was completed. Unfortunately the LGEA was in Baruten which is in the far west of Kwara and difficult to reach. Even worse the school selected was a good journey into the interior ff Baruten in a village called Taberu. I had heard lots of things about the journey-terrible roads, the need to stay overnight in rat-infested accommodation and the difficulty of getting food so when I was asked to go I was anxious to say the least. However it would be an adventure, I thought, a story to tell......
So armed with insect spray,  my bottle of lavender (to scare any rodents),  peanut butter sandwiches, tinned fruit, wet wipes and my mozzie net I got into the Hillux and off we went! Dare camw with me and Alartise drove us. They were both great and really looked out for me. It was a horrendous journey-the ‘roads’ were almost impossible and I have the greates admiration for Alartise whose arms ached badly after the struggle to get over all the potholes and negotiate ways through huge pools of water and didn’t complain once just took a couple of paracetemol so he could drive us back the next day! 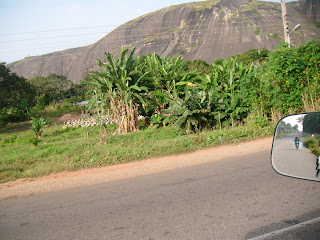 The big hill in Oluwa 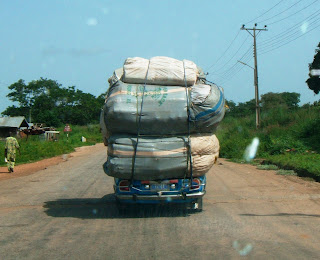 We saw some very heavy loads!
After leaving Kwara behind, we drove through Oyo state and Oluwa which is famous for its big hill. There is also a national park where monkeys are allowed to roam in safety-as opposed to being hunted and eaten. We then drove back into Kwara to enter Baruten. We were now only a few miles from Benin and were stopped by immigration. My passport was demanded. The fact that it was a photocopy didn’t go down well but then the official’s face changesd. “Ah British! Our colonial master. Go through!” he shouted.
The road got very ugly then! Dare had been down the road to Taberu the previous week on motor bike and came very close to falling off-I could see why. It was basically a dirt track but made almost impassable after the heavy rains. We drove past villages and I was stared at but as soon as I waved I was greeted with big smiles and children were very excited to see a white person.
When we got to the school Dare and Sahud, another SSIT who joined us at Baruten, started to get ready to test eight children. I asked the head teacher to show me around. This school is very rural, has no water and yet the progress was amazing. The pupils were all doing lessons. The teachers were using the lesson plans and I saw number lines in the children’s exercise books! There was also evidence of phonics on the chalkboards and flash cards. I was really impressed. Of course there were problems-one class had 100 pupils in it because they were a teacher short but they were really trying. The head teacher said the children had never seen a white person before so they were very interested in me! He said the school began in 1963 and I was the first white visitor. The Mla took a long time and it was very hot in the classroom but the children chosen willingly stayed behind long after school had finished so we could complete the testing. We were trying to do this in a very professional manner but it was a bit difficult as people kept coming in to greet me.  A lot of children also stayed behind and were constantly trying to peep at me. One teacher from the nearby secondary school brought his family of five into the room because they had never seen a white person before so it was distracting at times. They do not speak Yoruba here but have their own local language-Baruba. Fortunately Sahud live locally and also speaks Baruba so was able to translate the instructions for the numeracy tests. They did better in numeracy but attempted more questions in the literacy than the previous MLA showed. They could greet in English, knew a lot of the letters and could say some words and one child could read a few sentences . This may not seem much but the in the last MLA  most children couldn’t even do this. We gave all the children we tested pencils, rubbers, biscuits and a lolly. I think they quite liked the attention. 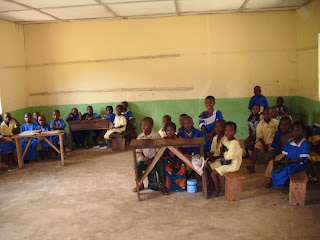 The children were squashed but doinf some wonderful work in their books. 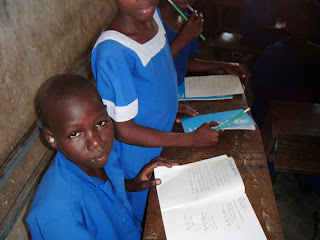 This boy showed me his number line! 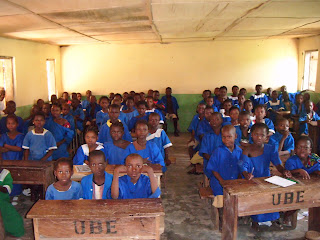 There are 100 in this class!
By now my bladder was fit to burst and we had to go back down the bumpy road back to the centre of Baruten  where we were spending the night so I had to find a private place. This was very difficult as everywhere I went the children followed me so I asked Dare to tell them to leave me for a few minutes. The head teacher overheard and insisted I take the key and use the staff latrine of which they were obviously quite proud. So I trecked across the field to a small tin buiding and unlocked the padlock on the wooden door and so wanted to just go behind the building to ‘ease’ myself but they were watching.. and I just could not bring myself to close the dood completely....  Need I say more... It was a dark smelly place full of huge shiny beetles!!
After photos with the teachers and signing the visitor’s book it was time to leave. I thought they were doing wonders there and it was a very rewarding experience. I will always remember those exercise books with number lines in! 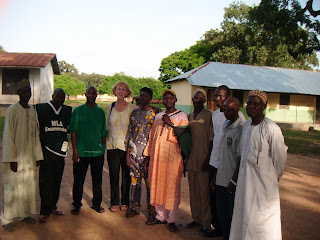 With the teachers and the SSIT
So now we had to drive down the awful road again and go our accommodation! We stayed at a Baptist Mission House. When we arrived I was shown a room with three beds for all of us. It took a moment for me to I realise the owner meant I was to share it with Dare and Alartise ! I quickly asked to see another room. I paid extra fo the rooms to be cleaned and the generator switched on. Basically he but a grubby sheet on the stained mattress, hung a curtain at the window and said we could have the generator for two hours. However he did assure me there were no mosquitoes or rats and provided me with a bucket of water. So I ate my sandwiches in the ‘dining room’ and took a kerosene lamp to my bedroom. I think when the missionaries were here it was probably an okay place but it had obviously not been maintained for years and was very dirty. There was no neppa at all or running water. However. I survived. I had my torch and the lamp and was not disturbed by any creatures.
The next morning we drove to Sahud’s house which was very interesting. He said we should have stayed with him instead of at the guest house. I would like to think I would have coped but think I would have had problems with the outdoor living and especially the food but it was very kind of him. I met his wife and his twins and watched the women busy preparing the food for the men. They were keen to show me how to pound the yam! One woman was doing it with a baby fast asleep on her back.
We also went to one of the ‘canteens’ by the roadside where I have often seen men eating. I felt privileged to be allowed to sit here. I could not eat the goat’s head soup  so they very kindly sent someone to get me some akara which was actually the best I have tasted here. Everyone was so friendly and as soon as I smiled they did too. It is quite strange having celebrity status but humbling 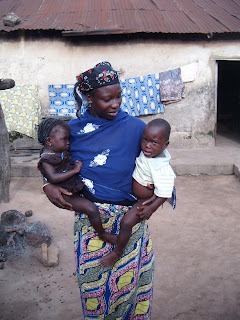 Sahad's wife and his twins. 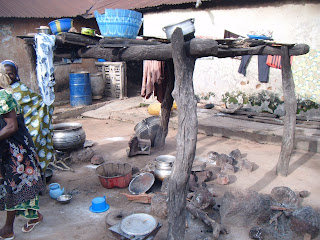 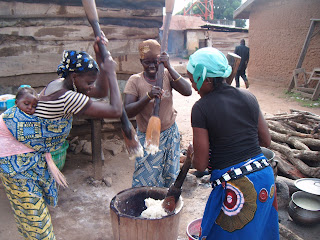 Pounding and the baby stayed asleep! 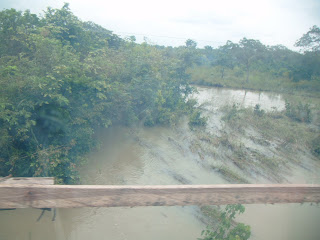 Going over the rickety colonial bridge was a bit scary!
Posted by Caroline Knowles at 08:08