Osogbo is the home of artists. Sadly it was raining when we visited and we were not able to see all the different crafts they do at the Nike workshop. We did get to see the Batik and the amazing designs. 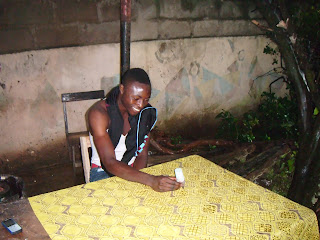 In Nigeria they don't use the little spoon like we have instead they use a tool made of foam. Some artists use cassava paste and produce a very distincive indigo design which does not show on the inderside of the cloth as in traditional batik. 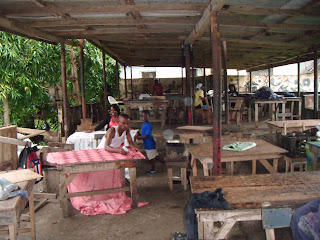 The workshop where artists serve their apprenticeship. 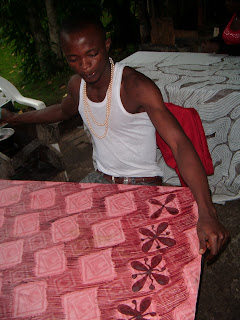 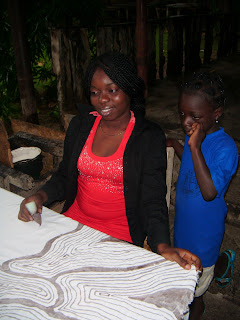 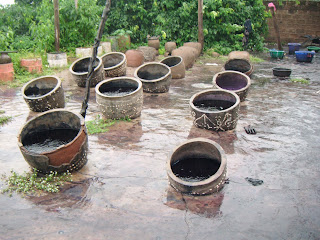 These are the pots with the dye. They also had a fire outside for melting the wax. 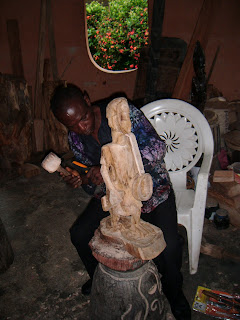 Baba is one of the artists. He does beautiful wood carving. 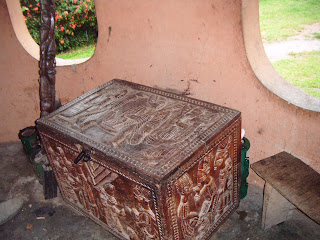 He keeps his tools in this beautiful chest! Daniel, another artist and Baba showed us round the workshop and then took us to the gallery owned by the artist, Nike. There were many beautiful fabrics here. The beaded pictures were beautiful and must take hours of patience as they are glued to give very subtle hues. I bought a batik tee-shirt but the prices of the other things were above my VSO allowance! The rain finally stopped and we got into a taxi and drove to the Sacred Forest-home of the Goddess of Love. 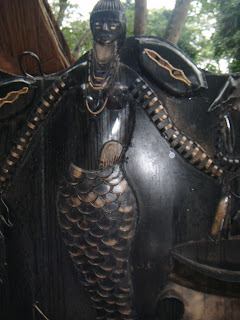 The forest is surrounde by walls and this is the entrance gate. It has lots of carvings of the Yoruba gods and goddesses on it but this is the important one-the mermaid goddess of love for which Osogbo is famous. Many people claim to have seen her at the ceremony held every August. They calim to have seen her rising out of the river. So we went in, having paid for the privilege of using my camera and a guide. The guide was quite hard to understand but it was an amazing place. Suzanne Wenger came to Osogbo in her twenties and really absorbed herself into the culture. She learned the languauge, married a Nigerian chief and adopted many Nigerian children. She was responsible for restoring the sacred forest which is now a UNESCO site. She died last year and highly respected here and almost treated as a goddess. She was an artist too and renovated the monuments in the forest as wellas adding new ones. 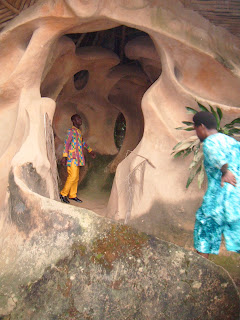 This is one of the new buildings which made me think of the Hobbit. 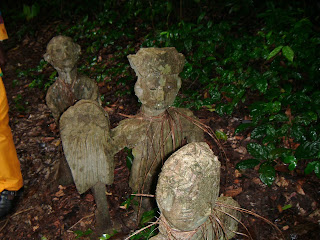 These statues are Yoruba gods and Suzanne is included. There are a lot of these statues scattered around the forest. 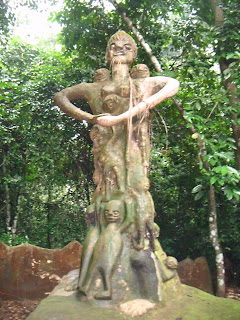 This is quite a spectacular statue-the goddess of fertility. People still come here to make offereings to the gods as could be seen from the rotting fruit on many of the statues. Two women-sort of priestesses I suppose stay here all the time to just pray to the goddess. We were suppposed to bring them aghift but were told that money would instead!!!!
The statue in the river was quite unusual too. Apparently former Yoruba kings would prostrate themselves on the banks of the river. They also had to go through certain gates backwards-all part of the ritual. The guide was particularly proud of the bridge which they called the Hanging bridge. The idea of a suspension bridge
was amazing to them and still is today. Health and safety is out of the window though as parts of the rail are missing and I was careful not to fall into the murky waters! It was quite atmospheric walking around as it was still misty after the rain. It was also nice to be surrounded by trees. There were quite a lot of monkeys as they are protected in the forest. 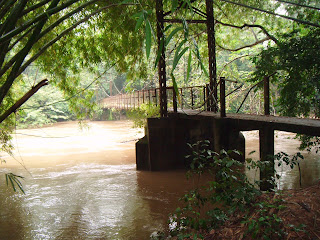 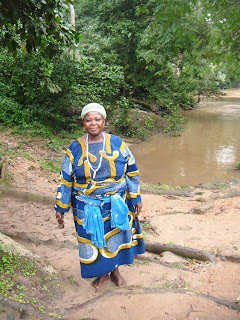 Happy to receive our gift-hope she prays for us! 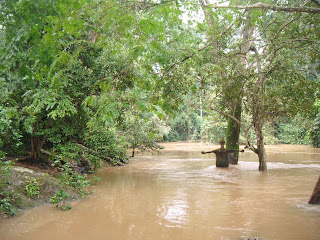 The goddess in the water. This is where the mermaid has been seen. The bank is where the kings prostrated themselves. 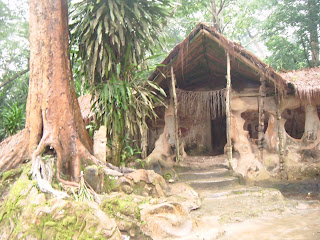 The first palace.
After this we took another taxi to see Suzanne Wenger's house. It is very elaborately decorated. The stone carvings are very unusual as are the drawings on the wall-they have a real aboriginal feel to them. We met one of her adopted daughters in the 'shop' and it soon became clear that I was meant to buy something. Fortunately there was a jumble of beads on a table as the works of art were not priced and I am sure way out of our league. I am not sure how wew ould have got the stone sculptures back on the bus either! I chose a green and brown necklace. I was told green and brown are spiritual colours so it was a good choice.
Back at the hotel I enjoyed the vegetarian special-a plate of chips with ketchup! the hotel was actually very nice-it was basic but clean and there was a telly. The next morning Lea made the mistake of ordering an 'English' breakfast which consisted of cornflakes served with hot powdered milk, toast, bright pink sausages, beans and an omelette so peppery it left him gasping! Daniel kindly took us back to the bus to make sure we got the correct price. The journey back was very hot but the driver wasn't in such a hurry as the one coming so I could relax a bit more. We were lucky as we had a seat each which is unusual.

Posted by Caroline Knowles at 04:01